If you are looking for a little class at the tables then French roulette is the one for you. As the name is French in origin meaning little wheel it’s a safe bet that the game is French too. So when you see all these different versions they are really just twists and variations on a theme. A theme that has been around now for centuries and looks set to be around for a few more. If you are looking to play French roulette online then just about every quality online casino offers this version for you to play.

So What Makes Roulette French?

Well as mentioned earlier technically every game of roulette is French in origin. But the main differences with the modern take things are board layout, language, wheel layout and some bets are different too. So let’s split this down and start with board layout. The traditional board layout for French roulette is quite a bit different than the other versions. In French roulette the wheel is positioned in the middle of the table. 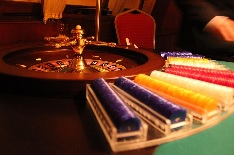 The betting layout is either side of the wheel and is designed so that a player on each side of the table can easily read the bets and reach them to make a bet. This feature is all but lost in the online game and it is very rare to find this layout online. Go to the south of France and you will find the traditional tables there.
Language is next. Obviously it’s in French. So Rouge/Noir is Red/Black. Pair/Impair is Even/Odd. Manque/Passe is 1-18/18-36. The made area where the language is used is in the better forms of the game that have call bets allowed. All of the call bets are in French for example Voisins du zero or neighbors of zero. This is a bit of a moot point with the online versions of French roulette because just about every online casino that offers French roulette has the English translation underneath. Once again the only place you will find a true French roulette table is in the likes of Monte Carlo.

The betting involved with French roulette is basically the same as American Roulette and European roulette but there are some interesting differences. These differences seem small but have a huge impact on the probabilities of the game. The biggest being the single zero slot. The simple addition of the double zero slot in American roulette practically doubles the house edge! Also with French roulette the En Prison and La Partage rules apply when the ball lands in the zero pocket. Check with your online casinos house rules to see whether this two apply, it varies enormously from casino to casino. But all traditional games of French roulette have one of these rules. These rules only effects the even money bets rouge/noir, pair impair, manqué/passe.

En Prison or in prison happens when the ball comes in zero at a brick and mortar casino the dealer would place a counter on every even money bet, imprisoning the bet for an extra spin. The result of the next spin will determine whether the bet is returned or forfeited. So if you had $50 on black and it comes zero the bet is held over and the next spin comes black you get your money back. If it comes zero again all imprisoned bets are lost. La Partage or the divide is similar but considered more favorable for the player is if the ball comes zero all even money bets get half their stake returned. These rules are never found in the American version.

The call bets are the next difference in a brick and mortar casino the call bets are recognized by the croupier and no chips are placed on the table. The French version has names for all these bets. In the American version these bets do not exist as single bets and have to be manually loaded. Some examples of the call bets are:

There are a few more besides but you will need to check house rules to see if these apply. All in all the French version of the game is richer and has better/lower house edge.