Becoming a leader in the incredibly competitive iGaming industry is mission impossible for most software providers, but not Pragmatic Play. This company was established in 2015 and started grabbing “Rising Star” accolades at EGR and other big award shows within two years.

Today, Pragmatic is a worthy adversary to the largest casino software suppliers such as NetEnt, Microgaming, and Evolution. Its premium entertainment library is expanding rapidly, attracting countless players along the way. If you’re here, it means that it’s caught your attention, too. This review will tell you everything you need to know about Pragmatic Play Casinos and the games you’ll find inside them.

If you’re already aware of this company’s products and are itching to give them a go, you can refer to the list we’ve compiled below. Our experts have separated the wheat from the chaff, meaning that each operator that we recommend is licensed, fair, and packs tons of quality games & bonuses. We stay committed to our readers and will add more awesome gaming sites after we test and approve them. Let’s take a look.

This firm is involved in nearly every iGaming genre out there. Understandably, slots are its bread and butter, but it also develops RNG table games, scratchcards, and bingo products. One of its recent ambitious enterprises was the creation of a purpose-built studio for live dealer games. That’s a load of stuff to cover, so let’s take it one step at a time.

Given the eternal and unmatched popularity of the reel spinning genre, we won’t surprise you by saying that Pragmatic Play online casinos mostly highlight the company’s slots. Each of these machines is made to deliver a sublime audio/video experience and features thrilling bonus stages with the potential for large wins. It can’t be any other way, as the company is vying with the very best slot makers for our attention and bets.

These games have themes that are well-known to most gamblers. Animals, ancient Egypt, mythological creatures, Vikings, cowboys, and cultural elements from the Orient are leitmotifs that we encounter in our everyday gaming experience. Still, they’re delivered in such a way that keeps you coming back for more.

Let’s take an example with “Wolf Gold,” the most popular of Pragmatic Play casino games. On the outside, this is a regular release with a 5×3 layout and 25 fixed pay lines. Its pretty graphics and smooth animations are commendable, but most players cite the gameplay features as its best aspect. Aside from packing regular Wilds, landing 3 Scatters here triggers a free spins stage in which the three reels in the middle spin as one giant symbol.

Additionally, there’s a “Money” symbol with random values that can set off the fall of a jackpot and an additional re-spin feature for even greater wins. Other masterful PP releases include “Great Rhino,” “Wild Walker,” “Fruit Rainbow,” and “Greek Gods.” What’s neat is that most of these titles also have their volatility level and features displayed on the loading screen.

The famous Netflix show “Peaky Blinders” is also one of the top Pragmatic Play games you should try. When you land the “Shelby Betting Shop” feature in the bonus game, you’ll receive sizable payouts for each main character that appears on the reels.

A Quick Explanation of the Prize Drop

This provider has devised a clever and attractive campaign called “Prize Drop”. Some online casinos that use Pragmatic software label it as an additional bonus that you don’t need to sign up for. Basically, “Prize Drop” gives players an opportunity to win extra cash from compatible Slots. If you’re lucky enough, you can get up to $1,000 in additional winnings. Participation is automatic for people who wager $0.50 or more per spin.

Additionally, every Sunday, Pragmatic Play Casinos grant $5,000 to the player who received the biggest win multiplier. The “Prize Drop” campaign won’t last forever, but its success is notable, so we expect that similar promotions will become a staple of this company.

Fans of Scratchcards have a big reason to look for Pragmatic’s offerings. The supplier has introduced several of these instant win games that are mostly themed after its popular Slots. Some of them have mouthwatering jackpots that stretch to $1 million.

Aside from that, we’ve seen four RNG table games by PP — two blackjacks, a version of European Roulette, and baccarat. All of them follow standard rules and come with $1-$100 limits. If you’re familiar with basic strategy, “American Blackjack” will reward you with the best RTP rate (99.60%).

Some Pragmatic Play online casinos also take advantage of the firm’s bingo products, which include 30-, 50-, 75-, 80-, and 90-ball variations. Meanwhile, “Bingo Blast” is a great mobile-friendly release that plays three to four times faster than regular versions. 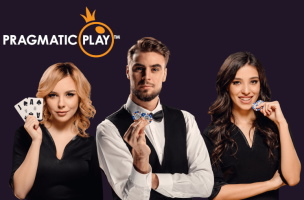 In early 2019, Pragmatic decided to expand in an entirely new direction. By building a new studio in Bucharest, Romania, the company indicated its desire to take a piece of the lucrative live dealer entertainment pie. Experienced players will tell you that this space is dominated by Evolution, and dethroning this giant of the industry is easier said than done.

Although the live Pragmatic Play games aren’t as compelling compared to what you’ll find in an Evolution lobby, the developer’s overall offering is expanding rapidly and has the following advantages:

Let’s move on to the streams you can join. Currently, one can enter rooms where blackjack, roulette, baccarat, and Sic Bo are played. Blackjack follows Vegas Strip rules and is played on 7-seater tables with “21+3” and “Pairs” as the side bets. The roulette is of the European kind, while baccarat comes with a large selection of side wagers. Sic Bo is popular in Pragmatic Play Casinos, as its payouts can reach 1,000:1.

Lastly, there’s a game show called Mega Wheel, which is a take on the popular Big 6 concept. The betting limits are wide enough to satisfy all budgets. English is spoken in almost all cases, but there are some rooms with German-, Russian-, Turkish-, or Italian-speaking hosts.

The success of this company can be partly attributed to the fact that it cuts no corners in terms of licensing. It has permits from over 20 jurisdictions, which include some of the strictest regulators in the world, like the UKGC and the MGA. Another big reason to prefer Pragmatic Play online casinos is that they’re provably fair. Multiple accredited testing laboratories such as GLI, Gaming Associates, and BMM frequently test and confirm the true randomness of the company’s RNG engines that are found in each game.

Pragmatic is a large and multinational enterprise with offices in England, Gibraltar, Malta, and five other countries. The supplier’s excellence is recognized not only by its fans but also by the industry. Over the last several years, the developer bagged big prizes such as “Best Slot” and “Best Game Vendor” from prestigious award shows like IGA, EGR, and Malta iGaming.