Not much is known about the roots of Rival Powered, except that its games first broke cover in 2006 at GiGse, a large US iGaming convention. After the Unlawful Internet Gambling Enforcement Act was passed, it was one of the few software suppliers that kept offering its products to American players. This explains why so many stateside operators are still known as Rival online casinos.

If you’re wondering what this developer is all about, our comprehensive report is what you need. We’ll list the top US and international gaming sites with content from this provider and give you a breakdown of its games.

Although the USA is still Rival’s primary market, the company has gradually expanded to the worldwide scene through several strategic partnerships. Nowadays, Australian and international players can also enjoy its software, which is why we’ve divided our list of recommended sites into three “regions.” All Rival casinos found in this paragraph were tested by our experts. That way, we can confirm that they are reputable and pay out promptly. Let’s check them out:

Keep in mind that country restrictions apply to the sites in our third group, so it’s best to visit them to see if you can play there.

The Types of Rival Casino Games You Can Play

Rival’s portfolio of games is quite varied, which is hardly surprising. The company has a turnkey software platform that’s utilized by many Rival casinos, so its content has to be diverse to satisfy player tastes.

In addition to 100+ slots, one can pick between various table games, video pokers, and specialty releases. You can find a breakdown for each of the major categories below. 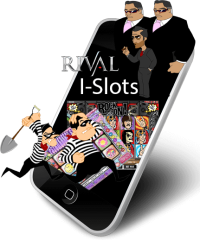 Historically, reel machines from this developer have been a bit of a mixed bag. Shortly after its establishment, Rival introduced iSlots, which were among the first such games to come with some sort of a storyline. Their dated graphics and soap opera-like plots might seem comical to some, but these Rival slot games were true innovators that still have a following. Some excellent examples include “Fixer Upper” and “Spy Game.”

After the iSlot revolution, the company released multiple 3- and 5-reelers with all kinds of themes. The trouble is that they had nearly identical features (Wilds and Scatters), pay-lines, and payouts. This is a common practice in the industry, but that doesn’t make it excusable in the eyes of some players. These games were all based on the old Flash player and disappeared from some sites for US and Aussie customers after the end of 2020. However, we’re mentioning them because they’re still available at most of the online casinos that we listed above.

In recent times, the developer has stepped up its efforts to deliver innovative slots with superior visuals. “Diamond Rhino” is a great example with its lovely graphics, pay-both-ways feature, and a 5-reel configuration in which the rows display 3-4-5-4-3 symbols, respectively. “Daikoku Blessings,” a 6-reel, 4-row offering, is also one of the most alluring and modern Rival slot games we’ve seen in a while.

The studio also offers three progressive jackpot reel machines. “Jackpot Five Times Wins” and “Strike Gold” are perfect for traditionalists as they feature classic fruit machine symbols and 3-reel layouts. “Money Magic,” the third pooled prize release, has a more contemporary 5×3 layout and is themed after a magic show. Regrettably, the jackpots of these products are quite humble compared to “Mega Moolah” and other millionaire-makers, as they rarely exceed $40,000.

When it comes to more traditional games of chance, this developer likes to keep things simple. It presents American & European roulette, a couple of blackjacks, and “Card Clash,” a rendition of the well-known card game of “War.” The choice isn’t that big, but it’s worth noting that most Rival online casinos also source content from other software suppliers to balance things out.

Our team recommends trying out the roulettes. The titles were released in 2020 and come with modern visuals and great mobile compatibility. The variant for the European Union is better due to featuring a single zero, which reduces its house edge to 2.7%.

As for the two blackjacks, they aren’t that different from one another. Both follow the Vegas Strip ruleset, don’t include any side bets, and have an RTP of around 99.40%. However, the “Multi-Hand” version allows you to bet on 3 positions against the dealer as a way to increase volatility. Meanwhile, “Card Clash” is as simple as it gets — you need to draw a higher card than the dealer to win; when there’s a draw, you go to war to determine the winner.

The sites on our Rival online casino list also feature at least 14 types of video poker from this studio, including “Aces & Faces,” “Deuces Wild,” and “Double Joker Poker.” We went through all of them and can confirm that “Jacks or Better” and its Multi-Hand rendition have the lowest house edge (0.46%).