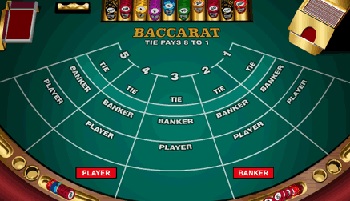 Baccarat has become very popular in online gambling circles, with a large following in Asia. It is in fact one, of the oldest and well-known of all casino card games. It had very few players to begin with, mainly high rollers, but has recently become very popular with average players. It’s recent popularity may also be due, in some small part, to the well-known British spy, James Bond. Who played high stakes baccarat against the baddie, Le Chiffre, in the original Casino Royale movie. A recent version of the movie replaced the game with the better known Texas Hold-em Poker.

There are very few rules to worry about, and while some may find them a little intimidating, a small amount of practise will soon gain sufficient understanding to play online baccarat along with the big league casino players.

Most of the best online baccarat casinos play a variation of the Punto Banco (Player Banker) game, although there are others to choose from.

What is the purpose of the game in an online baccarat casino?

The player with the highest scoring hand wins. The house deals two different hands, once betting has finished, with no chance of taking extra cards. Sometimes a third hand can be dealt, in accordance with the predetermined rules we’ve mentioned previously. If you’re playing Punto Banco you can bet on your own hand (Punto), the banker’s hand (Banco), or a tie. The card values of each hand are added together and compared to find a winner. Essentially you’re trying to predict the hand value that’ll be closest to 9.

How to play baccarat online

Picture cards and ten’s have no value, Ace has a value of 1, and the cards from 2 to 9 have their face value. A hands final point value is given as a single digit, the rightmost number. For example if the total value of your hand is 15 (say you have a 9 and a 6), it’s worth 5 points. Therefore the highest score for any hand will be five. The dealer will announce who has a total of 4 or 5. If neither player or dealer has a hand of 4 or 5 a third card can be dealt to either side depending on the drawing rules. Otherwise the highest value hand is declared the winner.

Punto Banco has strictly followed betting options, determined and controlled by each casino, and is always played according to a set of drawing rules Essentially the online casino game baccarat is a game of chance, perfect for beginners to enjoy.

Bets on a player payout evens, bets on the banker payout the same but usually with a 5% deduction for commission. Ties pay odds of 9/1. The best strategy to use when you play online baccarat is try and reduce the house edge, as you can’t make any decisions during the course of play. Bets on a tie give the house a 14% edge, so possibly not a good decision to bet on a tie. A better decision would be to bet on the player, as the house edge is reduced to a little over 1%.

Apart from Punto Banco, which we’ve already mentioned, there are two more versions of the game you can play at an online baccarat casino.

Chemin de Fer
This is a very popular version of the game in France. The premise of the game is the same but there are also a few important differences. In Chemin de Fer the role of the banker rotates. Whoever is the banker for a specified round stakes their own money and stays the banker as long as they continue to win. It’s normal for the house to take 5% commission from the banker’s winnings. The rules determining whether a third card is taken are more flexible in Chemin de Fer.

Baccarat Banque
This is another European favourite, and like Chemin de Fer offers more chances for using a strategy. This version is also known as “A Deux Tableau”, or two tables, because of the unusual way in which bets are placed. Players can only bet on ‘players’ cards and not the banker. It’s called two tables because there is a player 1 and a player 2. Two cards are dealt to each of the players and two cards to the banker. If there are 6 players at the table then 3 would be Player 1 and 3 would be Player 2.

People have been learning how to play baccarat for centuries

The true origin of the casino game baccarat is one that is fiercely defending by two particular countries – Italy and France. The originator of the game is thought to be an Italian gambler called Felix Faiguerein. However, it didn’t really become popular until a little later when it travelled to France with the soldiers of Charles VII. This was towards the end of the 15th century and was also when two of the main variations were created – Chemin de Fer and Baccarat Banque. After that it pretty much made its way across the globe and eventually into the world of online gambling.

Baccarat didn’t make its way to America however, until the 19th century, when it was brought there by English and French who had moved there to live. It didn’t immediately take on as there was another card game, black jack, that was preferred.

Baccarat made its way to Cuba towards the end of the 19th century, where it became known as Punto Banco, and stayed there until the 1950’s. It was then brought to Las Vegas by a writer and casino player named Tommy Renzoni and enjoyed a revival in its fortune. The Americans really took to the game and decided to stick with the name Punto Banco, but also introduced a few variations. The Europeans still prefered to play Chemin de Fer or Baccarat Banque, which is why the best online baccarat casinos offer players three choices.