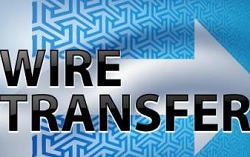 Funding an online casino account has never been easier. The available methods to move money around the cyber world are many. Online casino realise that more methods available mean more people can play. Some countries have some strange laws in place when it comes to moving money around especially to an online casino. There are so many different ways to deposit that the oldest form of electronic money transfer tends to get overlooked. The wire transfer. When it comes to the wire transfer online casinos actually prefer this method over most. Why? It’s very difficult to get a chargeback on a wire transfer. Once the money is credited to an account it’s there. They can be stopped in transit but it is not that straight forward.

Why A Wire Transfer?

If you are looking for online casinos that accept wire transfer, it will not be a long search. Just about every single one does. But why would you use a wire transfer? They are slow, some can take 5 days! There will always be a fee and depending on the type of transfer that can be steep. There may also be hidden fees from third party intermediary banks that pass on the money. The main plus to a bank wire transfer is the security of it. Considered to be the safest way to transfer money electronically. Banks have the toughest online security and your money and details are safe. If you deposit using a bank wire online casinos will sometimes offer a bonus when you do. Online casinos really like the finality of the transfer they hate the fact a credit card can charge back!

There’s more than one way to ‘wire money’ and depending on the method vastly different charges are applied. The standard bank to bank wire transfer takes around 3-5 working days. The fees for this are regulated within the EU and a bank can only charge the same as a national transfer if the transaction stays within the EU. In the US domestic charges are a lot higher than Europe and International charges can be very costly and vary hugely from bank to bank. You can of course have a priority transfer which is much quicker but the cost is large. Then you have retail money transfers the oldest surviving of which is Western Union. Despite legislation designed to prevent money laundering this method of money transfer is still very popular. Money can be sent from a Western Union office to your online casino account. This method can be very expensive though. There has been a lot of controversy surrounding the anonymous nature of this method. The threat of funding to terror groups has put a lot more pressure on these transactions and monitoring of these money movements has increased of late. As it stands only Western Union and MoneyGram are used by online casinos none of rest of the competition is getting a look in. It will be interesting to see if this method is used much longer.

How Did It All Start?

The invention of the telegraph allowed the electronic money service to be born. The most famous and the first truly successful service was offered by Western Union around the early 1870’s. Using their own telegraph network it quickly became a booming success, within five years or so over two million dollars a year was transferred by them. A customer would enter an office where the telegraph operator would, using code books and passwords, ‘wire’ the amount to another office. The cash paid in sending office would be paid out in the receiving office. Cash was always available as it was always moving in and out. It did make telegraph offices a target though and security got beefed up. It could be said that the armed guard at the Western Union office was the first electronic money services’ security firewall. Although the technology has changed, the basic principle is the same. Pay money in one office somebody picks it up at another. Western Union set the bar for the telegraph industry and greatly influenced the money transfer market for years to come. Western Union was one of the original 11 companies tracked when the NYSE was born in 1884. Times have seen swings in popularity when it comes to wiring money. The modern competition to the bank wire system are the likes of TransferWise and VFX Financial PLC. The sometimes large hidden third party costs have opened up a chance for many different forms of ‘wire transfer’. The fact that companies no longer need large premises to engage with the public means costs are cut and those savings can be relayed to the customer. How this translates to the online casino business remains to be seen. More ‘wire transfer’ methods may be accepted in the furture.