Gladiator Slot Review — Spin & Fight for All the Marbles 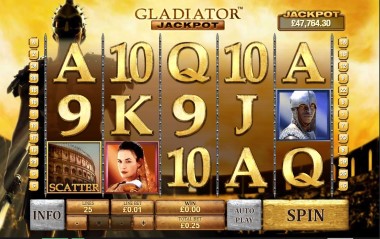 While spinning the reels and hoping for a big win, players get to experience thematic features and symbols that can’t be found in any other game of chance.

Our team has reviewed quite a few licensed gaming products, but the Gladiator slot holds a special place in our hearts.

Not only is this Playtech product inspired by the legendary movie starring Russell Crowe, but it also has a progressive jackpot that has made a few lucky bettors millionaires throughout the years.

Read on to learn everything about the game and find the best online casinos that offer it today.

Quick Facts about the Gladiator Slot

Before we dive deep into discussing the features & jackpot, let’s go over the sights and sounds of Gladiator. The first iteration of this game broke cover in 2008, while the progressive version appeared four years later. Simply put, this title is by no means new, but we have to say that it has aged rather well.

There aren’t any moving elements in the background, as the only things one sees are the shadowy figures of Maximus (Russell Crowe) and the Coliseum set in front of a bright orange sky. Curiously, the Gladiator slot game doesn’t depict its heroic protagonist as a paying symbol, but his mask acts as the “Wild”. The other important characters such as Commodus, Lucilla, Gracchus, Juba, and Proximo serve as the highest-paying “regular” symbols. Additionally, you have six lower-paying ones that are in the form of playing card ranks running from 9 to Ace.

While the reels are stationary or spinning, you won’t hear any music or get to see flashy animations. All of that changes when a winning spin occurs. We also like the vibe of the bonus stages, which we’ll discuss right now.

The Gladiator Slot Is Teeming with Exciting Features

A standard layout of five reels and three rows serves as the base of this machine.

You might find it interesting that the Gladiator slot game has adjustable pay lines. You can activate all 25 or reduce this number all the way down to 1. Most modern games come with a fixed number of lines, but this amendable setup wasn’t a rare sight back when the slot premiered.

To get a payout, your spin needs to have 2-5 identical symbols arranged on a pay line starting from the first (leftmost) reel. 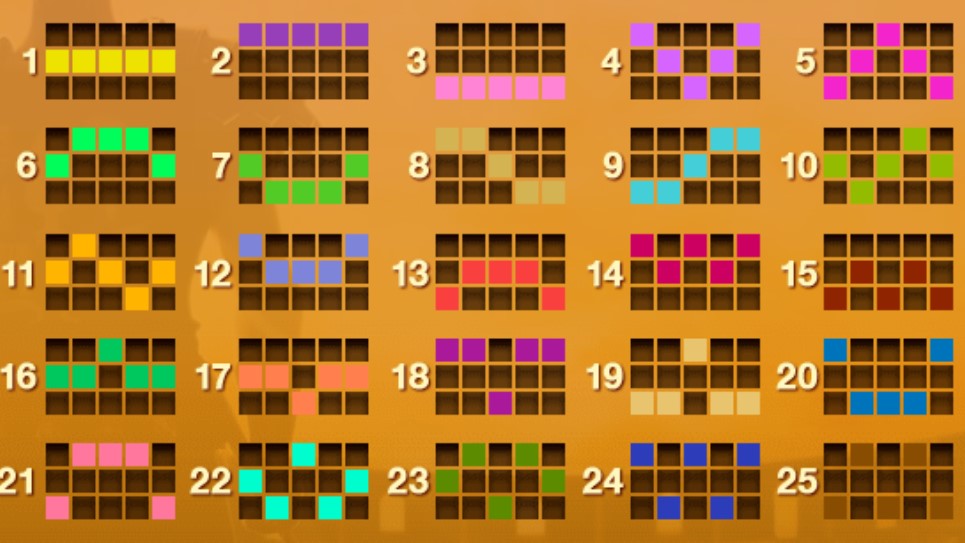 As we mentioned earlier, the gladiator’s mask is a Wild, so it can substitute any symbol except for the Scatter to help you win. Wilds can only appear on the three reels in the middle. If three of them land simultaneously, you’ll enter the “Jackpot Bonus” event. In a nutshell, this mini-game includes three types of masks — bronze, silver, and gold. The stage will pick nine of them at random, and if all the masks are golden, you’ll win the progressive jackpot.

The Gladiator slot machine takes a small percentage of all wagers to make its pooled grand prize grow. The seed sum isn’t that large, but, on average, the jackpot swells to $1.32 million before it drops. According to the latest data, the largest progressive win downed in this release is $3.2 million. 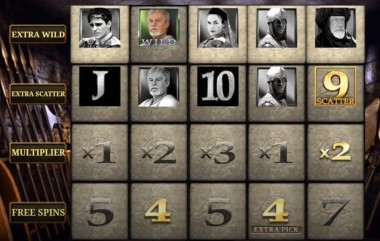 The Scatter symbol supplements the jackpot game in an awesome way. If 3+ Scatters appear anywhere on the reels, you’ll enter the “Coliseum bonus.”

These slabs hide prizes, and you need to pick one per row starting from the bottom.

The first row determines how many free spins you’ll get, the second adds a multiplier to your wins, while the third and fourth will make two symbols adopt Wild and Scatter properties during the bonus round.

Afterward, the casino slot Gladiator will trigger a free spins stage with all of the above features activated.

Fighting to the death in an arena is anything but a safe occupation, so it’s no wonder that this game has a risky disposition. The first obvious sign of high volatility is that you’re trying to win a progressive jackpot, which is, to put it mildly, a rare event. However, even the regular symbols are structured to give infrequent but high payouts. For example, landing a Commodus 4-of-a-kind awards an x500 bet multiplier, while the 5-of-a-kind will multiply your wager by 5,000.

Our Gladiator slot review team recommends adopting a patient and conservative approach with this product. Don’t bet a large portion of your budget on a single spin, as the chances are that you’ll go bust rather quickly. Instead, try to stake even sums that don’t exceed 1%-3% of your bankroll. The $0.25-$25 betting limits offer some flexibility in this regard.

Playing with all the pay lines turned on will assure that you get the maximum RTP of 91.5%. We have to note that the expected returns are lower than the 96% slot average, but this isn’t uncommon for games with large pooled jackpots.

Does the Casino Slot Work on Mobile? 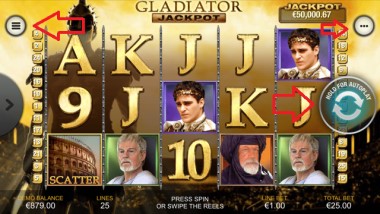 Earlier in our Gladiator slot review, we mentioned that the release is rather long in the tooth. However, you won’t encounter any problems if you want to play it on your mobile device. Its creator Playtech has updated the game over the years to make it compatible with phones and tablets.

When you play on mobile, you’ll be greeted by a simplified interface that hides most of the options behind two buttons at the top corners.

Meanwhile, the spin and auto-spin functions are merged into a single icon positioned at the right side, making it easily accessible while holding your phone horizontally. Alternatively, you can also swipe on the reels to spin.

How to Play the Gladiator Slot Game

After playing this slot, you’ll likely feel like a prizefighter. You’ll either achieve eternal glory by downing its top 5-of-a-kind or jackpot or experience a symbolical death if its high volatility takes a big bite off your bankroll. In either case, the Gladiator slot will offer you thrills and entertainment along the way.

If you wish to enter the virtual Coliseum today, make sure to do it with a reputable operator from our recommended list. These casinos are not only safe but also present fantastic bonuses that will give you a better chance of landing a legendary spin.