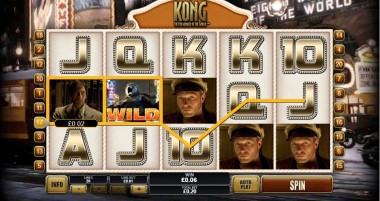 The mighty film monster Kong has captivated audiences for the better part of 100 years. Since the original film premiered in 1933, this giant ape has been featured in countless sequels, cartoons, video games, and even battled it out with Godzilla in a couple of Japanese movies.

Today, we’ll take a look at Playtech’s “King Kong” slot, a reel machine based on the highly-rated remake from 2005 starring Jack Black, Adrien Brody, and the lovely Naomi Watts. This release offers excellent entertainment through its awesome visuals & features, but are its payouts up to par? Read on to find out!

Like most contemporary slots, this machine has a matrix of 5 reels and 3 rows. However, its pay lines aren’t fixed. You can choose to play with a maximum of 20 or lower it down to 1. In our opinion, it’s best to activate all of them, as this gives you a much higher chance to trigger one of the bonus functionalities. You can wager as little as $0.01 per line, so you’re not required to risk lots of money to activate all the available patterns.

As always, you’ll need to land three or more symbols on a betting line to win. Some machines pay both ways, but in this one, the sequence needs to start from the leftmost reel. Aside from granting the highest payouts, King Kong is also considered a “Wild” that takes the role of other symbols to help you win more often.

Three Wilds Grant You a Bonus

You’ll be delighted when a trio of wilds lands anywhere on the reels, as it unlocks a special re-spin feature. While you’re in jungle mode, the re-spins augment any Wilds that appear, forcing them to stick to the reels for the duration of the bonus.

The King Kong slot game grants an even better reward while you’re in the big city. The re-spins spawn entire wild reels — the 1st and 5th reels on the initial re-spin, followed by the 2nd and 4th reels on the second, and then the 1st, 3rd, and 5th to wrap it all up. Keep in mind that you can’t enter other bonus modes during the re-spin stages.

Scatters Have Many Hidden Powers 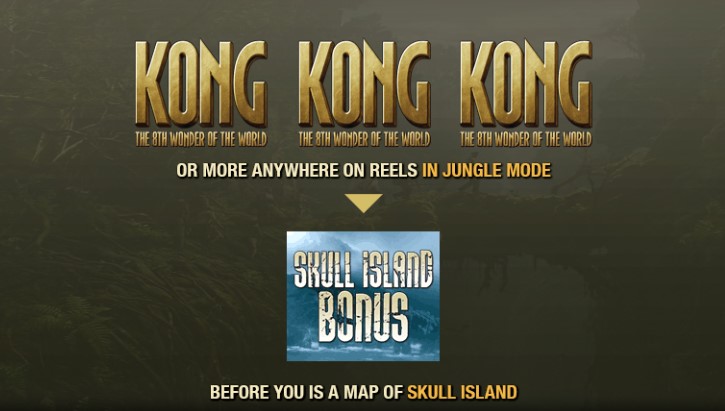 You might be wondering how exactly does the game switch between the jungle and the big city. This happens whenever three Scatters appear during a single spin. However, before the shift occurs, the King Kong slot will trigger a special mini-game.

In jungle mode, you’ll enter the “Skull Island bonus.” You’ll see a map of the isle with various dots scattered across it. Clicking on any of them will reveal different animals or the ape king himself. You’ll receive a reward when you match three identical animals. Meanwhile, there’s only one Kong, and you’ll down the biggest prize if you manage to reveal him before you get a 3-of-a-kind.

When you’re playing in the city, getting three Scatters will send you to the famous skyscraper where Kong clashes with airplane squadrons. There are three waves with three planes each, and you can destroy one aircraft per wave. After the final showdown, these three prizes will form your total reward.

The Jackpot & RTP of the King Kong Online Slot

Our King Kong slot review team has mixed feelings about the payouts of this release. On one side, winning spins occur frequently, and you can often get two or three payouts from a single round if you activate all the pay lines. On the other side, your average win will be below or equal to the size of your wager.

To grab the big bucks, you’ll have to sit and wait patiently for 3+ Wilds or Scatters to appear, which doesn’t happen that often. Even then, the jackpot for landing five Kong symbols is x3,000 your bet, which is far from insignificant but not too impressive, either. The King Kong slot RTP is estimated to be at 95.5%. This is in line with the average return rate for most modern reel machines.

How to Play the King Kong Slot Game

We’ve discussed every nook and cranny of this title, so now it’s time to see how and where to play it. The best online casinos we’ve listed above are all powered by Playtech and have stellar reputations and impeccable licensing. They are available in the UK but also in Canada and several big EU markets. Pick a site that you like, make a registration, and remember to search for the official title of this slot: “Kong: The 8th Wonder of the World.” If you look for “King Kong,” it won’t show up.

Once the King Kong slot machine loads, try to focus on the lower portion of the screen. All the buttons you can press are located there. It’s best to start from left to right — the “info” button summarizes all the features we discussed so far. If you don’t need a reminder, set the number of active pay lines (we recommend staying at 20) and then tweak the “line bet” with the “-/+” buttons. Your total bet will be shown in the middle. If you’re not sure how much to wager, our advice is to avoid betting more than 5% of your bankroll at one go.

When ready, press “SPIN” to start playing. If you don’t want to click the button every time, use the “Auto Play” icon, then sit back and enjoy the action. Events in the King Kong slot happen automatically. You’ll only need to interfere once one of the Scatter bonus stages is triggered.

Just like in the movies, the purpose of this gargantuan gorilla is to entertain you. Our team truly had a great time while playing the slot. Its multi-faceted nature can keep you engaged for hours, but we have to note that it probably won’t satisfy every fan of the genre. Its house edge isn’t particularly low, and the grand prize isn’t enough to satisfy most jackpot chasers.

Still, if you’re looking for a fun release that won’t be too harsh on your budget, the King Kong slot machine won’t disappoint. Try it today by visiting one of our approved operators, and remember to claim the welcome bonus on your first deposit.