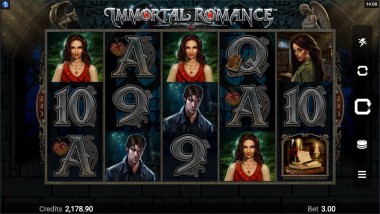 The Immortal Romance slot is one of the most beloved online games of chance. This vampire-themed reel machine broke cover in 2011 when the Twilight Saga was breaking box-office records around the world. Instead of delivering a cheap knock-off, its creator Microgaming infused this release with a slew of innovative features and free spin modes that captivated players for years.

In mid-2020, the casino software supplier developed a remastered version of the game capable of enchanting modern bettors on any computer and smart device.

Our new review will show you all the new stuff, remind you about the core mechanics, and recommend awesome Immortal Romance casinos.

The Story & Theme of the Immortal Romance Online Slot

This title doesn’t include cinematic introductions or cut-scenes, but its story is worth telling, nonetheless. In a nutshell, Sarah, the lovely lady in red and the highest-paying symbol, is a scientist that has dedicated her life to curing the supposed disease of aging. During an academic seminar, she meets Michael, a mysterious professor and the second-ranked symbol, who falls in love with her. It turns out that Michael is an ancient vampire, and his blood might play a key part in Sarah’s research.

Meanwhile, Mike’s undead buddy Troy develops an interest in Amber, Sarah’s best friend, who’s a descendant of Caribbean witches. These two characters serve as the supporting cast and the third- and fourth-highest paying symbols, respectively. The Immortal Romance slot game also includes Wild and Scatter symbols whose features we’ll discuss in a bit. It’s worth pointing out that there are eight low-paying symbols that are in the form of a castle, a piece of paper & a fountain pen, and playing card ranks going from 9 to Ace.

The game’s stony reels are set against a backdrop that resembles the inside of a gothic church. Aside from some shimmering lights at the top of the screen, there aren’t that many animations in the background. Still, you will see moving elements when you get a winning spin. The soundtrack also deserves a special mention. An eerie melody accompanies the main game, while each of the free spin bonus rounds has a special theme song. 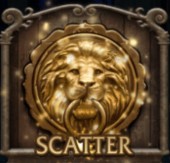 Like most modern reel machines, the Immortal Romance online slot is built on a matrix of 5 reels and 3 rows. The title boasts 243 winning ways, so landing 3 or more adjacent symbols from left to right will always result in a win.

There are two special symbols called the “Wild” and “Scatter”. The first can substitute any other token except for the Scatter. Additionally, all winning combinations containing a Wild grant double the normal reward. As for the Scatter, you only need two of these tokens to land anywhere on the reels to win a reward. Meanwhile, getting 3 or more will send you straight to “The Chamber of Spins”, a special free spins stage with four modes.

As you can see from the above image, each character adds a special twist to the free spins stage. However, keep in mind that the Immortal Romance slot game requires you to land 3+ Scatters 5, 10, and 15 times during your gaming session if you wish to unlock Troy, Michael, and Sarah. Here are more details about the special abilities of each dramatis personae: 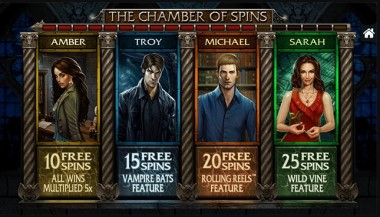 Finally, we have “Wild Desire” feature, a bonus that triggers at random. Simply put, it can turn entire reels Wild, and it’s possible for Wilds to take up every spot in the Immortal Romance slot.

One of the best additions to the remastered version of this release is its wider betting limits. In the past, players were limited to wagers between $0.30 and $6. Now, high rollers will be happy to know that they can stake up to $30. Still, we wouldn’t recommend going that high unless you can afford to spend $1,500+ at one go.

This slot has always been extremely volatile, meaning that winnings are not that frequent, but they have the potential to be quite large. According to the official paytable, the jackpot stands at $364,500. Our Immortal Romance slot review team assumes that this prize can be downed with the highest wager, so we divided it by 30 to receive an x12,150 multiplier. The RTP stands at 96.86%, which is around a percent higher than the industry average. However, this rate is only achieved after millions of rounds, so your immediate returns will likely vary drastically from it. 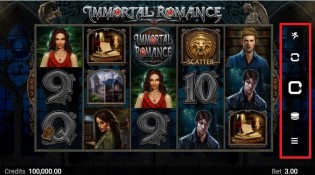 The remastered variant is crafted on HTML5, which allows it to run seamlessly on any browser or app for phones, tablets, and computers. We were especially impressed with how it performs on smartphones. The loading times are super zippy, the game can adapt to any screen size, and you can even play it while holding your device vertically.

All the buttons are situated on the right side (bottom in portrait mode) so that you can reach them easily. Two other big additions in the revamped variant are autoplay and the quick spin mode. Lastly, Immortal Romance casinos can now include the game in free spin promotions, but keep in mind that the decision is down to individual operators, not Microgaming.

If you’re ready to sink your teeth into this vampire-inspired reel machine, you can easily get going by following this simple guide:

Much like a vampire, the Immortal Romance slot never seems to get old. This release was great even before its 2020 makeover. Its features, theme, and prizes are benchmarks for the iGaming industry. The new version has simply polished a fantastic product by adding a few quality-of-life functionalities and improving the loading times, graphics, and mobile compatibility.

Start hunting for the $364,500 jackpot today by registering with an Immortal Romance casino from the above list. Remember that these software operators offer many deposit bonuses intended for slot enthusiasts. You can use them in the best online casinos to increase your bankroll, which gives you a better chance of landing a big prize. Good luck, and play responsibly!