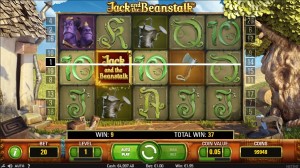 NetEnt is the best creator of video slots for the last 10 years. This is not a subjective statement. Statistics show that the developer’s products are favored by the customers of nearly every big online casino out there.

While the company’s “Starburst” often steals the spotlight, there are plenty of NetEnt machines that are arguably a better choice for players. Today, we’ll be examining the “Jack and the Beanstalk” slot, a release with fantastic payouts, rewarding features, and an immersive fairy tale theme. See what makes this title special by reading our new review and play the game in any of the best online casinos on our list.

The Everlasting Visual Appeal of the Jack and the Beanstalk Slot

It’s easy to see why NetEnt’s “quality-before-quantity” approach is a winning one. This game was released in 2011, yet it still looks modern and lively. When you play it for the first time, a short-animated clip will immerse you in the story. Then, you’ll be transported to Jack’s scruffy 18th-century homestead, where the little protagonist will greet you from his door.

The Jack and the Beanstalk slot game packs subtle moving elements that bring its rural background to life. As you play, you’ll see blue butterflies fluttering across the reels and birds flying in the sky or peeking from the missing roof tile. There’s also a second stage that takes you to the giant’s cloud top castle, but we’ll discuss it later since it’s associated with the free spins round.

A total of 12 pay symbols are present. In the Jack and the Beanstalk slot machine, the Scatter is in the form of a treasure chest with magic beans, while the Wild is a red square with the game’s logo. Jack is the highest-paying regular symbol, followed by the giant, a goat, a hatchet, and a watering can. As per convention, the five low-payers are illustrated as playing card ranks that start at 10 and go to Ace.

The Jack and the Beanstalk Online Slot and Its Mythical Features

In this title, the action takes place on a setup of five reels and three rows. You have a total of 20 pay-lines that are active at all times and work from left to right. Before you start playing, our Jack and the Beanstalk review team recommends adjusting the betting level & coin value settings. The lowest you can go is $0.20, while high rollers can wager up to $100 per spin.

As always, you’ll need to align three or more identical symbols on a pay-line to receive a reward. Now, we’ll cover the special properties of the Wild and Scatter.

The Wild doesn’t appear that often in this game, but when it does, you’ll hold your breath in excitement. In addition to taking the place of regular symbols to create more winning combinations, 3-, 4-, and 5-of-a-kinds containing a Wild yield a triple payout. However, that’s not the biggest advantage of this feature.

In the Jack and the Beanstalk slot game, the Wilds are “walking.” In layman’s terms, this means that whenever one appears, it will grant you a re-spin and move one reel to the left. For example, if such a symbol drops on the rightmost reel, you’ll receive five free spins as it moves to the first one and then disappears. While all of this is going on, more Wilds can pop up to prolong the combo and increase the potential for big wins.

When you see three or more Scatters land anywhere on the reels, you’ll journey to the giant’s castle and receive 10 free spins. This bonanza can be extended in one of two ways:

Needless to say, climbing giant plants to raid a giant’s castle is a risky undertaking. The Jack and the Beanstalk online slot exemplifies this with its high volatility rating. You shouldn’t expect to land a colossal prize from getting a 5-of-a-kind. Even Jack, the highest-paying symbol that appears quite rarely.

The biggest chance of winning is when you enter the free spins stage and stay there long enough to activate all the Wild augmentations. For that to happen, you’ll need a fair bit of regular Scatters and Walking Wilds to appear, which requires lots of luck. Even so, successful spins occur roughly a third of the time. This means that you can get a lot of playtime from your bankroll if you manage it carefully.

The Jack and the Beanstalk slot RTP measures in at 96.28%, which is slightly higher than the average for reel machines. According to the game, the maximum you can win during a spin or a bonus stage is 600,000 coins. 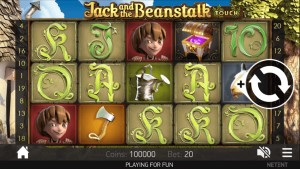 You might have some concerns about whether a game of 10+ years will play well on your fancy new phone or tablet. However, NetEnt has been investing heavily in its mobile technology for years. The developer has ensured that all of its popular titles can be enjoyed on the go.

The Jack and the Beanstalk Slot game, in particular, has a “Touch” version. Its user interface is simplified, allowing you to spin and manage your bets more easily. The reels occupy a larger portion of the screen, and some of the background animations are missing. However, there’s nothing omitted in terms of features or payouts, so you can expect a satisfying experience on all iOS and Android smart devices.

How to Play the Jack and the Beanstalk Slot Game

We consider this slot as one of NetEnt’s finest creations. Its graphics are pleasant, the features can get your adrenaline pumping, it works great on computers and mobile devices, and it has the potential to yield big wins.

The Jack and the Beanstalk slot RTP rate is not the highest we’ve seen, but we wouldn’t say that it’s bad, either. In fact, NetEnt machines (license #MGA/CRP/109/2004-02) with a low house edge such as Blood Suckers are often excluded from casino promotions, so it’s good that you won’t encounter such a problem here. If you’d like to try and bring a fairy tale treasure into your life, make sure to pick a licensed operator from our list. That way, you can play safely and benefit from attractive promotions with transparent T&Cs.