If you are looking for online roulette European versions are available at every online casino there is. The simple reason for that is, it’s the most popular form of roulette there is. The timeless simplicity of this game has kept punters coming back for more over the centuries and doesn’t look like stopping anytime soon. 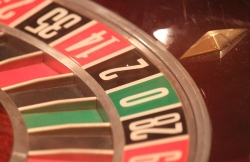 With so many different forms of roulette being offered it’s easy to get confused. What is the difference? Well the main differences are the number of zero pockets and the set-up of the wheel. There is also the related betting and house edges. Let’s go into them a bit and help unravel the myths.

This style of roulette dates back to the mid-19th century. It was introduced as way to attract customers away from other venues, in what was a very competitive market. Two French brothers realized they could make their game a much better prospect for the gambler by taking away the double zero pocket. Yes you read correctly. The original game of European roulette had a single zero and a double zero in the wheel. The simple removal of the double zero slashes the house percentage almost in half. This version ran alongside the double zero for a number of years in Europe until it became the number one choice. Roulette had reached the shores of America quite early on and the single zero version did not catch on. This had given rise to the double zero version being called American roulette.

European Roulette Has The Divide And A Few Others

Betting is what the game of roulette is all about. If you want to properly enjoy European roulette online then there are some differences in the betting rules that are very significant. The first two surround the zero pocket. These two rules cut the house odds even more when compared to the double zero game. The first is ‘the divide’ or ‘La Partage’ rule. This rule applies to even money bets only. When the ball lands in the zero pocket half the wagered stake is returned to the player. So if you bet on red/black, odd/even or high/low and the ball comes in zero you get a refund of half. All other losing bets are taken. The second rule is very similar and is known as ‘in prison’ or ‘En Prison’. This also applies to even money bets only. If the ball lands in the zero pocket then the even money bets are held over for the next spin. If the next spin is a winner then the stake is returned. If it loses then it’s forfeit.

Traditionally in European land based casinos there are what’s known as announced bets or call bets. These are the more advanced bets and have a recognized format. The casinos that offer the best European roulette online have the option in a side bar or drop down to make these call bets. They are combination bets and cover a lot of the wheel. A few examples are:
The Neighbors of zero this is a 9 chip bet on all the numbers surrounding zero on a European roulette wheel. The seventeen numbers from 22 to 25 on the wheel are split up into a two chip trio bet on 0, 2, 3, a one chip bet on splits 4/7, 12/15, 18/21, 19/22 and 32/35 and a two chip corner bet on 25/26/28/29.

Unfortunately the internet has blurred a few lines with the different versions of roulette these days. There is a lot of cross over between ‘French’ American and European. You can have European wheels that are colored like American but have the single zero and the correct order. Table layout, language and betting structure have all bled out to a certain extent. Make sure you double check all the rules before enjoying your game.