We all know that the online casino is there to make money. The house always wins, yet we still want to play. The anticipation watching the ball bounce around the wheel as it spins is intoxicating. Roulette has been with us now for several centuries and over the years has changed very little. The basics of this age old casino game are the same the world over. However there are some differences in the betting and the wheel layout. The most obvious difference is in the names you have European Roulette, French Roulette and American Roulette. So what are the differences and do they really matter?

The Devil’s Wheel In America Is Loaded 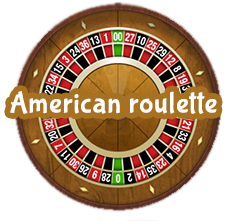 The American roulette wheel has a very obvious difference. An extra slot with 00. 38 numbers as opposed to 37 may not seem a big deal but it makes a huge difference to the house edge. The house edge or expected value is the average amount a player loses relative to any bet made. Take the example of a single number bet on an American wheel. The chances of the ball landing on your number are 1 in 38 and you win 35 times the bet. The chances of losing are 37 in 38 so the expected value is a simple equation
-1*37/38 + 35*1/38 = -0.0526 (5.26% house edge) compare that to European roulette with 37 numbers
-1*36/37 + 35*1/37 = -0.027 (2.70% house edge) and you see that just one extra number and the house advantage nearly doubles! There is one other bet where the edge is even higher on an American wheel the 5 number bet has a staggering 7.89% on an American wheel. It’s no wonder just about every online casino has an American roulette version in its lineup.

Its Not Even American!

You love all things American and want to play American roulette online. Fair enough. The only thing is American roulette is not American. This is a huge misnomer. Many people believe the double zero board originated in the US. This is very wrong. The 38 slot wheel is actually the original version of the wheel used in the early 19th century. The game of roulette was firmly established in Europe by the middle of the 19th century and two Frenchmen wanted something to make the casino they ran in Bad Homburg stand out from the crowd. They introduced the single zero wheel with its increased odds for the punters. It was an immediate success and many casinos introduced it alongside the 38 slot wheel. Eventually all European casinos used the single zero wheel and phased out the double zero. The game had reached the shores of America quite early with the double zero wheel, some American casinos increased the house edge by adding an eagle slot as well for the bank. The double zero version stuck and one can only assume it was because of the favorable house edge. So much so this version became American roulette and the single zero became French or European.

Visually the layout of an American roulette table is quite different from the French version. The classic French table has the wheel set in the middle of the betting area. The American version is at one end. In the French game all of the betting is set out in French the American table is in English. With the explosion of internet casinos this has all got a bit mixed up. French roulette is set up like American the wheel at one end with French and English betting terms. The only differences being the betting and the single zero. When it comes to how to play American roulette the gameplay is basically the same. The differences are there is no ‘La Partage’ when the ball lands on a zero or double zero. The bank wins every time unless you bet on the zeros. No system is better or worse playing American or French. Mathematically the outcome is random but it is also heavily biased toward the casino. It is a very strange thing that people still want to play the American version. Why would you want to play a version of a game that was more stacked against you? If you have never played roulette before the best advice is start small. Place bets on the outside even money red or black or odd/even. The payout is lower but the chances are an almost coin flip. The more you play and understand you can then try the combination bets and the higher paying like the corner bet or the line bet. As long as you treat it as a piece of entertainment and remember that the house has the edge at all times you will have fun.