Oman is an absolute monarchy situated on the east of the Arabian Peninsula. It holds a strategic position at the entrance to the Persian Gulf. Bordered on land by the United Arab Emirates, Saudi Arabia and Yemen and having maritime borders with Iran and Pakistan. With neighbours like these it’s no surprise that the country is not the freest of places. It does have a better reputation than say Saudi Arabia but not much. Torture is said to be rife and slavery was only made illegal in 1970, the last country to do so! There are estimates of up to 1 000 000 forigen nationals in country with very little rights and in servitude bordering on slavery. Although the legal system is based on the “Basic Law” and Sharia is not used as a penal code the country is Muslim and offenses according to Sharia are punished. There is a parliament voted in with universal suffrage but they are merely advisory. The Sultan has absolute authority. So with all that being said it goes without saying gambling in any form is not allowed.

Not An Oil Based Economy 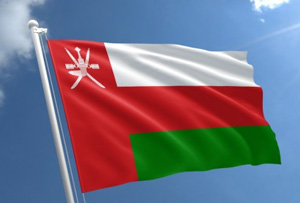 Oman differs from its Arab neighbours in that it only has modest oil reserves and the bulk of its income is tourist, and agricultural based. Fishing has been part of the Omani culture since its beginning. Once a great power house in the region Oman had influence across the Arabian Peninsula, the Persian Gulf and Indian Ocean. By the peak of its power Oman had reached across the Strait of Hormuz and into modern day Iran and Pakistan and as far south to the spice and slave trading port of Zanzibar. Despite issues surrounding freedom of speech Oman is ranked as one of the world’s most improved countries as far as development in the last 40 or so years. For example the internet coverage has gone from 8% to 40% in around 5 years. But the internet is highly censured and many sites are banned for religious reasons. That includes gambling sites which are considered immoral. The authorities also block VPN sites so getting around the blockades is not easy. There are some articles claiming that prosecution doesn’t happen. The fact that Omani authorities hide a lot of information from the public that is almost impossible to confirm. The crime does carry a prison term and if Amnesty International is to be believed you do not want to go to an Omani jail.

Omanis Do Gamble However

Despite religious prohibition there are many illegal gambling dens in Oman. High profile cases of Omanis losing millions in foreign casinos have been reported. One politician’s wife reportedly lost $2 million in one visit. So it is a fact that some Omani’s gamble. Not a wise decision maybe the authorities come down hard on any caught. But if you are going to risk gambling the best Omani online casino must be foreign. If you use a local based online casino it is run by unlicensed operators and it will get shut down. All of its records would be in police hands so it would be a case of wait for the visit! If you must gamble with an online casino and it really isn’t advisable then do not pick one that has accounts in Omani rial they will almost certainly be local. An account in US dollars would be the way to go as the rial is pegged to the dollar so there would be no exchange rates. There may be handling charges depending on the method you use to fund the account.

It Still Needs A License

To limit the exposure to risk, as there will be enough anyway, only gamble with an online casino that has a license from one of the reputable jurisdictions. Malta, Gibraltar, the Isle of Man and Alderney issue licenses for global remote gambling. The UK Gambling Commission only covers the UK but if a site has UK customers as well as the rest of the world it will be covered by the most respected authority in the world. The UK has the longest running regulated gambling industry in the world. The choice of online casinos accepting Omanis is not going to be very good but there are some that have good reputations. There are a lot that have very bad ones so do some research. Unfortunately there’s a good chance the sites you want to visit to do the research may be blocked. Another thing to consider is you may well find a usable VPN and open an account only to find in a short while the authorities blocking that as well. Be prepared to have great difficulties and possibly losing access to your account.

Oman Is Not Going To Change Anytime Soon

There have been quite a few protests by Omani citizens in recent years linked with the Arab Spring uprisings. The lack of say in their own government and issues of little or no free speech has been the general tone of things. All protests are crushed. It is an offense to insult the Sultan and to even imply fault with any minister. Since the protest laws have been tightened further and the regime has become hardened in its resolve. A slightly more free state than its immediate neighbors but Oman is no democracy. There is no future for a gambler in Oman. You are better of trying to get an exit visa and emigrating. Although that is apparently very difficult also. Gambling will always be illegal in Oman. It’s an Islamic country gambling is seen as a morally degenerate pastime that detracts from the righteous duties a good Muslim must perform. This is not going to change. Even if the centuries old Sultanate is overthrown and a democratic government is put in its place the people are still Muslim. MGM are not likely to be investing anytime soon.