Reel machines themed after ancient Egypt are incredibly common in the best online casinos, so what makes the “Book of Ra” slot so special? For starters, this game was crafted by Novomatic, a famous studio that powers countless land-based gaming halls across Europe. Book of Ra’s broad availability cultivated a large following that sought out the title once it premiered online.

This product isn’t new by any stretch of the imagination. It has seen as many as 8 remakes throughout the years, but people tend to choose the original because of nostalgia.

If you, too, are curious and would like to learn more about it, let our review guide you through the pharaoh’s ancient tombs.

The Book of Ra Slot Has a Vintage Look

One of the unique drawing points of the slot machine Book of Ra online is its shape. Instead of occupying the entirety of your display, the game’s screen is encased in the virtual frame of an old-school gaming cabinet. This frame also hosts a plethora of buttons that allow you to spin, manage your bets & pay lines, view the paytable, and so on.

The reels and pay symbols are appropriately stylized to fit the ancient Egyptian theme. The only exceptions are the low-paying symbols, which are shaped like the top five playing card ranks — Ace, King, Queen, Jack, and 10. Their high-paying counterparts are depicted as a scarab, a sarcophagus, a statue of the goddess Isis, and an Indiana Jones-esque adventurer. The Scatter, which is the only special symbol, is the supposed Book of Ra. The online slot could have inspired the creation of Play’n GO’s “Book of Dead,” one of the most popular reel machines of today.

Overall, we like the gameplay experience. Animations run smoothly and are quite responsive if you like to spin fast. The graphics are super satisfying for a game that’s been around for more than 15 years. You’ll even see nice little effects when you land a winning spin.

Features of the Book of Ra Slot Game

Have you ever wondered about the design of the first “video slot” machine? Book of Ra online can give you a hint of how things were back then. Its layout of 5 reels and 3 rows might seem ordinary by today’s standards, but it wasn’t so overused back in 2005 when this game premiered.

Most contemporary online slots have a fixed number of betting lines, but this one allows you to pick between 1, 3, 5, 7, or 9. Going with fewer pay lines can help if you want to use smaller wagers, but do note that the Return to Player rate also goes down. To win a prize, you’ll need to align 3+ symbols on one of the betting lines, beginning from the leftmost reel. There is a “gamble” feature here, meaning that you can wager your winnings for a 50/50 shot at doubling them. This step can be repeated up to 5 times.

The 2-in-1 Special Symbol 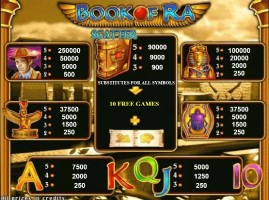 There’s one symbol that doesn’t play by the rules in the Book of Ra slot game. The mystical tome takes the role of traditional Wilds and Scatters. This means that it can help you form more winning combinations by substituting other symbols. Additionally, if 3, 4, or 5 books appear anywhere on the reels, you’ll receive 10 free spins.

During the free rounds, the game will pick one of the regular symbols and turn it into an expanding Wild that covers each reel it appears on.

This symbol will be highlighted, and a new paytable will show up next to it. You’ll win as long as 3+ of these expanding Wilds land on any spin.

The reels they cover don’t need to be adjacent, which is quite nice.

Examining the RTP, Volatility, and Payouts of Book of Ra

You should know a few things before playing the Book of Ra slot. Online casino sites might offer up to 8 variants of it, as Novomatic has introduced various versions throughout the years. They come with different graphics and sometimes include extra pay lines and slightly different payouts. The game we’re discussing here features 9 betting lines and a jackpot of x5,000 your bet, which is downed with a 5-of-a-kind adventurer.

The original has a high volatility level, as evidenced by the large payout differences between 5-of-a-kinds and 4-of-a-kinds. Its RTP with all lines activated stands at 96%, which is the average for such casino games. The free spin stage in the Book of Ra slot doesn’t occur that often, but it tends to pay well. It has the potential to grant larger rewards than the jackpot, as it can be re-triggered.

Is the Book of Ra Online Slot Mobile-Friendly?

You’ll probably need to pick one of the game’s sequels when playing on your mobile device. The original was crafted on Flash, which is no longer supported by iOS, Android, and the most popular mobile web browsers.

If you can’t find a Book of Ra slot online casino, you can always satisfy your cravings by downloading the official app from the App Store or Google Play. Keep in mind that these are free-to-play versions that can’t actually pay you out. They use a “fun” currency that can also be purchased with real money, but you won’t be able to convert it back to cash.

A Quick “How to Play” Guide

This Novomatic hit falls into the “old but gold” category. Its RTP rate and payouts aren’t groundbreaking, but they also don’t fall short compared to your average slot machine. Book of Ra online also has a certain retro charm that ensures its ever-lasting popularity.

Our team also liked how the Scatter and Wild are merged into one symbol, which is quite rare these days. Regrettably, you probably won’t enter the free spin mode too often, but at least its winning potential is promising enough to keep you excited while spinning the reels.