The Nation Of Brunei The Abode Of Peace 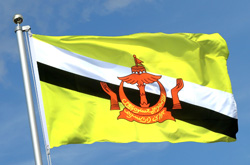 What a beautiful name for a country and what a beautiful place it is to. Unlike a lot of South-East Asia Brunei has not stripped its land for palm oil production. Largely thanks to the biggest oil fields in the area and the substantial sums they bring in. Natural old growth rainforest cover a large area of the small nation. Even the capital city is a mix of mosques and water village with mangrove forests a stone’s throw away filled with crocs, snakes and monkeys. Ruled by the Sultan the country is a peaceful, strictly religious state where social bonds and boundaries are strong. The population has one of the world’s highest living standards, with very generous state handouts and no tax burden. That’s correct, tax free.

In 1963 Brunei was the only Malay state that chose to stay as a British protectorate instead of joining the federation that went on to be Malaysia. Full independence from Britain only came about as late as 1984. The legal system was based on British common law up until 2014 when Sharia law was introduced. The death penalty is now given for a wide verity of offenses. Of course alcohol and gambling are crimes and are strictly enforced. Anyone found guilty of gambling faces a heavy fine and imprisonment of 6 months. There are obviously no land based casinos in the country and no online brands operating there either. There have been convictions for gambling online so there must be some online gambling sites available to the residents of Brunei. There can’t be many though and there quality must be in doubt. Due to one of the world’s most expensive broadband service only about a third of the population are connected to the internet. There really is no market for online gambling in Brunei despite around one third of the population being non-Muslim.

No Change For The Future

The government has expressed concern that more integration with the world via commerce will spoil its culture. The fact that Sharia law has been phased in points to an even further insulated society. The nation is quite happy as it is. Tourism is a welcome part of the economy and foreign guests are treated extremely well. But Brunei sees no need to allow resorts for drinking and gambling as some countries are doing. With a population of only 400 000 or so there is not likely to be any dramatic shift in attitude any time soon. Brunei has a clear vision of a society closely bound to the religious state, peaceful and content and it works.